Whole Foods: when a denial won’t do

Whole Foods: when a denial won’t do 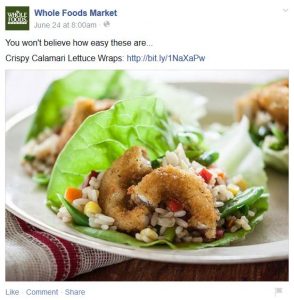 Whole Foods has a price problem. The goods in their stores are considerably higher priced than similar goods from most grocery store chains. That’s not the problem. Though many have complained about their high price-point, millions of consumers still shop there because of the store’s reputation for carrying only high-quality, organic foods. There are those who will tell you that Whole Foods doesn’t always deliver what they promise but it doesn’t matter because it’s about reputation, not reality.

That’s not why Whole Foods has a price problem. They have a problem, because the Department of Consumer Affairs Commissioner in New York just told the world that Whole Foods has been routinely overcharging customers. We’re not talking a few cents on a loaf of organic bread, we’re talking $14.84 on a package of shrimp and $6.15 on a vegetable platter. The problem, they say, stems from mislabeled weights, so the price per pound is correct but the packs are labeled as being heavier than they are, so the price is higher than it should be.

Whole Foods says this is nonsense.

And yet, last year they agreed to pay $800,000 in penalties for the same kind of pricing problems in California. And now we’re supposed to believe that the investigators in New York got it wrong? Not likely, but it doesn’t matter. Even if the investigator blew the story out of proportion, the damage is already done. Whole Foods, the store that already had a reputation for being too pricy, is now the store that steals from customers. That’s not me talking, that’s straight from the Whole Foods Facebook page.

The company posted an “easy” recipe for Crispy Calamari Lettuce Wraps on the page. The first comment says “As easy as stealing from your customers . . . ”

That’s tame compared to some of the remarks that were left on the page. Things got so bad for awhile that Whole Foods had to post a statement asking people to be respectful of others and refrain from defamatory language and spam.

The majority of commenters are simply linking back to news stories about pricing errors over and over again. Whole Foods, to their credit, is trying to carry on with business as usual but it’s going to take some time before their delicious recipe posts will be met with cheers instead of jeers.

Whole Foods’ public response was an emailed statement that said “We disagree with the DCA’s overreaching allegations” and they say that the penalty they’re being asked to pay is excessive. Reading between the lines, it sounds like Whole Foods isn’t denying there’s a problem but they’re denying that it’s as bad as the DCA says it is. It’s possible that the parent company doesn’t know the depth of the problem. It’s also possible that they do know and the statement is what they have to say legally to protect themselves.

Whether they pay $100 or $100,000 in penalties, that’s not going to undo the damage to their reputation. The average consumer sees a fine as a big company’s way of paying off the problem. What they really want is a mea culpa and a public promise that it won’t happen again.

The other tricky part is walking the line between finger pointing and corporate responsibility. It would be easy to say that the equipment was faulty or that low level employees didn’t understand that you have to weigh the food without the packaging (I suspect this might be part of the problem). What Whole Foods needs to say is that management failed to properly train employees and maintain the equipment. In the future, both of these will taken care of and they’ll install a system of checks and balances to make sure mistakes are caught before they hit the shelves. History has shown us that customers are willing to forgive and forget, even after learning that they’ve been overcharged in the past. All they want is to feel like a company is owning up to their mistakes and is taking measures to correct the problem.

As long as this story is in the news, Whole Foods is going to continue getting hit with social media sticks and stones. All they can do is shield themselves with quality content and monitor for offensive language. As long as posters are keeping it clean, the angry remarks should remain until the storm dies down. And it will. I have no doubt that Whole Foods will make it past this reputation roadblock as long as they stay cool and are upfront and honest about the problem and the solution.