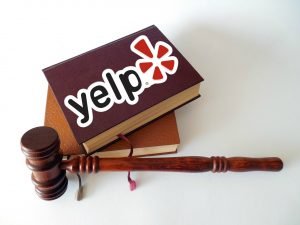 Yelp is gearing up for another fight that resulted from a similar case with a totally different outcome. San Francisco lawyer Dawn Hassell sued a former client saying that the client’s Yelp review was defamatory and an outright lie. A San Francisco judge sided in favor of Hassell  (interesting name for a lawyer) and ordered Yelp to remove the offending posts. This all happened two years ago.

Now, even though Yelp wasn’t a party in the lawsuit, the company is fighting back saying that the ruling violates the protection afforded them by the Communications Decency Act (aka CDA). This is the act that saved them in the case of the lugubrious locksmith.

Why didn’t it save them in the case of the litigious lawyer? Because the lawyer didn’t name Yelp as a party in the lawsuit. The CDA protects content providers from being held financially liable. The lawyer wasn’t looking for compensation from Yelp, she simply wanted the posts removed.

Not naming Yelp was an interesting end run. If Hassell had named them, Yelp would have had a chance to defend itself in court, raising all of the issues they’re raising now. But since they weren’t named, they were legally bound to follow a court order without a chance to speak. How is that fair?

We must note here that in the Hassell case, the review was deemed to be bogus – a lie concocted to injure the lawyer and that’s why Yelp was ordered to remove it. If the judge had found the review to be true, it’s assumed that he would have let the review stand.

So now Yelp is taking the case to a higher court in hopes of having the ruling overturned. This time, they’re not going into battle alone. Almost all of the heavy content hitters such as Facebook, Twitter, Google and dozens of news organizations have pledged their support in the matter. They’re all in fear of the precedent this ruling could set if it holds. First, such a ruling – if widely enforced – would push every internet content publisher to think twice before printing anything bad about anyone. And it would force them to pretty much do away with commenting or any other kind of public reply.

What’s tough here is that companies and individuals must have the right to protect themselves from false statements and unfair attacks on their reputation. How to do that without infringing on the First Amendment or running into the Communications Decency Act is the tricky part.

In this case, experts say it’s likely that the Supreme Court will side in favor of Yelp.

If you’d like to know more about this case, Eric Goldman has all the details on his Technology and Marketing Law blog.