An unhappy Yelp employee decided to take the online review company to task in public with a scathing post about poor employee treatment which she published on Medium.

No, you’re not experiencing Deja vu. It actually happened twice in the space of a few weeks. Back on February 23, Talia Jane published an open letter to her CEO complaining about the low pay, poor training and the squandering of funds over at Yelp headquarters.

Three days ago, Jaymee Senigaglia published a post titled “Yelp Fired A Single Mother Today: Me“.  She explains that she was an excellent employee who even came to work when she had the flu (please don’t) but needed to take off a few times to care for her son. Then her boyfriend had a terrible accident and she asked for more days off so she could be by his side in the ICU. (Sounds reasonable)

Give that the title of her post, you won’t be surprised to learn that she was fired and in the worst possible way.

I am the single mother who while in the ICU today got a phone call from my manager, director, and HR who said I could either come in now or resign. When I said I needed some time and this is all traumatic with caring for my boyfriend they told me that I would need to make a decision by noon and if I didn’t come in or resign, they would terminate me. In tears I said ok and hung up.

Wow, that’s cold. But it gets colder. In what can only be described as a moment of insanity, Yelp posted this reply on Twitter: 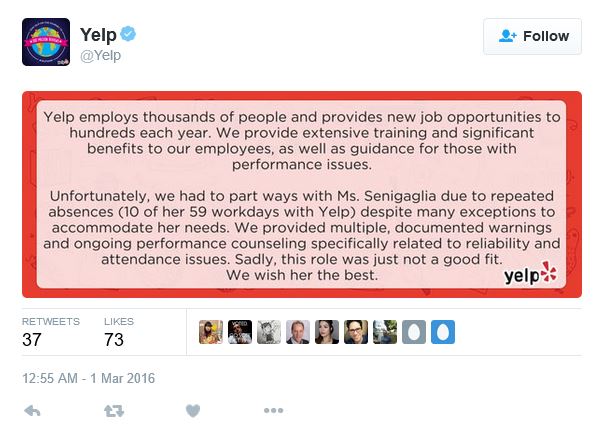 Hear that? That’s the sound of the Yelp lawyers pulling their hair out. Normally, what happens with HR stays with HR but this isn’t a normal case. Legally, Miss Senigaglia may have forfeited her right to privacy when she went public with her story. But I can imagine a judge holding Yelp to a higher standard.

Legal issues aside, what did Yelp hope to gain by firing back at an emotionally distraught employee? Did they expect Yelp users to understand? Is there any scenario where the average consumer would side with the big corporation over the hardworking, single mom?

Yelp already has a bad reputation for bullying the little guy and now this. Hundreds of people have replied to the Tweet, many saying they’ve deleted the Yelp app and most calling their behavior abhorrent.

Will the outrage effect Yelp in the long run? Probably not but combined with their response to the earlier crisis it’s a bad sign of things to come.

Do you think Yelp did the right thing by publicly sharing its side of the story?