Advertising on YouTube? The huge issue that could damage your reputation

Advertising on YouTube? The huge issue that could damage your reputation

When you place an ad for your company on television, you get to choose when it airs — or more importantly – what kind of content airs on either side of it. If you’re a company that specializes in family friendly movies, you’re going to schedule it to run during an animated feature, not the latest, bombs blasting episode of 24: Legacy.

When you advertise on YouTube, you don’t get to choose where your ad lands. YouTube’s behavioral bots take care of that and they’re alarmingly imperfect. I’ve seen ads for gruesome, R-rated horror movies show up in front of Disney content and loud, ads for extreme sports showing up in front of a relaxing, meditation video.

In my case, these mismatches are nothing more than annoying. But there have been times when the match-up was far worse.

About a week ago, The Times of London published an expose that blasted YouTube for allowing content producers to upload videos in support of terrorist groups. As if that wasn’t bad enough, they also discovered that all kinds of offensive videos were earning ad dollars from many of the world’s most well-known brands. For example, you might see a sweet ad for Walmart’s line of Easter treats in front of a video advocating racial violence.  (Quick Note: YouTube advertisers do have access to a certain level of targeting tools but clearly it’s not enough given the issues that have come to light this week.)

If you were to see such a thing, would you assume that Walmart was in favor of the content? While many people understand that brands don’t control the ad placement on YouTube, others instantly jump to the wrong conclusion. How many others? Adweek ran a quick poll to find out.

Keep in mind that only 502 people responded to their poll but I think that the results are probably typical of a larger sampling. It starts off with 48.8% of respondents saying they have seen offensive content on YouTube. It doesn’t pop up very often but often enough for them to remember. Most said they had been exposed to racist content (30%) while almost an equal number didn’t want to say what they saw that upset them. 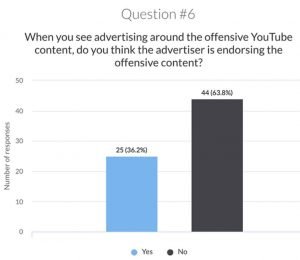 Here’s where it gets rough; 71% say they remember seeing advertising content on an offensive video. 40.6% said that after seeing this content, they felt worse about the advertised brand. 55% said it didn’t change their opinion and a cheeky 4.3% said that seeing an ad on offensive content made them feel better about a brand. Yikes!

Even though nearly half of those surveyed said these ads had a negative impact, only 36.2% said the ad meant the brand was endorsing the offensive content. To sum it up: if your ad does show up in bad place, most viewers won’t assume it was your choice, but they’ll still thinking badly of your brand. That’s rough but understandable. You can’t unsee something and it’s hard to get that association out of your head, especially if the video that follows is particularly horrendous.

In order to protect their brand names, dozens of high-profile companies, such as AT&T, Verizon and Johnson & Johnson, have pulled all of their advertising from YouTube. This move could cost the venue $750 million in ad revenue. That’s going to have a trickledown effect, hurting the small content producers who count on their share of that revenue to pay the bills.

The big brands say they want more than retargeting; they want YouTube to police and eliminate offensive content, but that’s a slippery slope. There are creators who post on important but sensitive topics, who have had their videos demonetized by the bots that deem them to be offensive. YouTube says creators who experience this issue can ask for a review of their case but that’s going to take time. Ultimately, individual human beings are going to have to decide if a video crosses the line or not and that’s never going to be a perfect process.

If YouTube can show that they’re making an effort to eliminate the worst of the content, brands will likely return to the site because they have to. More and more viewers are abandoning traditional TV and traditional TV commercials in favor of online content. With so many eyeballs on YouTube, it’s hard to imagine any brand staying away forever.

For now, we’re stuck between a cute cat video and hard place. Brands want to be seen, but they can’t afford to be seen if it means consumers will forever associate their name with highly offensive content.

Do you advertise on YouTube? If so, are you worried about your content showing up on inappropriate videos? And do you think that it could negatively impact your brand image?