How too much of a good thing ruined this YouTuber’s reputation – or did it?

How too much of a good thing ruined this YouTuber’s reputation – or did it? 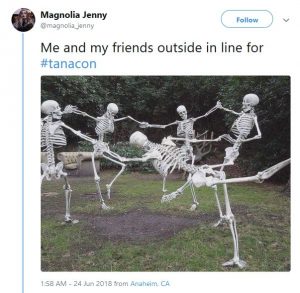 Tana Mongeau has more than 3 million followers on YouTube who tune in regularly to see videos like “How to Cake Your Face Like a Hoe” and “I got Caught having sex on a Ferris Wheel”.  With titles like that, you wouldn’t think “reputation” would be high on the list of things she worries about – but not so. If there’s one thing a top YouTuber can’t abide, it’s disappointing her fans. That’s reputation roadkill in the content creator world.

This chapter of Tana’s story began when she herself was disappointed by VidCons refusal to give her a “featured creator” badge. For those who don’t speak millennial, that means that the biggest convention for YouTubers (yes, it’s a real thing) didn’t think she was enough of a celebrity to warrant the special badge. In practical terms, their refusal meant that Tana didn’t have a security team to accompany her at the event, which meant she couldn’t enjoy the con without having to personally shoo away the hordes who wanted to snap a selfie with the star. (Not being sarcastic, again, this is an actual thing).

The feud with the VidCon powers-that-be escalated to the point where Tana decided to show them how it should be done. She decided to start her own convention where every creator would be a featured creator. She rented out a ballroom at a nearby hotel. Invited her powerful YouTube friends and showed up expecting to host a small gathering of several hundred fans.

But several hundred turned into several thousand and suddenly there were 15,000 uninvited guests waiting in line, in the hot California sun, hoping for an up-close-and-personal with their favorite YT star.

Those that had bought their tickets ahead of time and were at the front of the line, were quickly overwhelmed by the tremendous crowds inside the small venue. In return for their $80 entrance fee, they each received a bag of trinkets and the honor of sitting on the floor watching Tana marry a couple of fans on stage.

Those outside started getting sick from lack of water (step out of line to visit the bathroom and you lose your place!) Temperatures and tempers were rising and soon the fire marshall stepped in and shut the whole thing down. Not just down for the unticketed, but down for everyone.

Ticket holders demanded a full refund. Those who had traveled halfway around the world for the event wanted their expenses covered and everyone wanted an apology and an explanation.

The next day, Tana promised refunds to everyone who asked but it did little to save her rep with her fans. But was it really her fault? On one hand, if she was a big enough celeb to expect security at VidCon, she should have expected a big turnout at her own event. On the other hand, she had to work with the space that was affordable and available at the time. How can she be held liable for thousands of unticketed fans who came by with high hopes?

After dozens of stories in the press and thousands of social media messages about the disastrous event, a new picture emerged. The local police put out their own press release saying that the crowd of 15,000 was actually 5,000. And it wasn’t the crush of unticketed fans that caused the event to be shut down, it was the fact that Tana sold 5,000 tickets for a venue that only holds 1,500.

Oops. Looks like the “we’re all in this together” con was just that. . . a con; a publicity scam. And publicity is exactly what she got. Publicity from outlets that never would have covered the event if it hadn’t gone sideways.

Did the convention fiasco hurt her reputation? Yes, in the traditional sense. Her fans felt she had let them down. But in the YouTube world where drama fuels the most popular channels, a reputation hit can actually be a good thing.

The twist that no one saw coming, though, was the call-out by the YouTube stars who were getting pulled down by her maelstrom. A fan who feels disappointed will forgive and forget. But a fan who feels like a fool will unsubscribe and never look back.

Word of advice to any company planning to launch their own convention: only a celebrity can walk through an angry mob and come out bigger than before. For the rest of us, proper planning is the only way to prevent a reputation-crushing performance.

Share the post "How too much of a good thing ruined this YouTuber’s reputation – or did it?"